This top Biden ally’s public cavorting could end everything

The establishment is constantly promoting “the next thing.”

But one current “next thing” which everyone must care about may just suffered a huge self-inflicted hit.

And his public cavorting could end everything.

The plight of Ukraine was sold to Americans as “the next thing” everyone must care about with undivided attention.

But one photo shoot with Ukrainian president Volodymyr Zelensky will have you scratching your head about the war in Ukraine, and wondering what he was thinking.

Russia’s war of aggression against Ukraine has been truly horrific for the soldiers and civilians on the ground, and has created ripple effects in the global economy.

However, globalists have stooped to an unbelievable level of war propaganda in order to nudge the United States into a full-scale war with nuclear-armed Russia.

As much as the warmongers have pushed, the American people do not want another endless war.

But that’s still what they’re getting through their tax dollars.

And the corporate-controlled press is putting a pretty bow on it with a cringeworthy Vogue photo shoot featuring Ukrainian president Volodymyr Zelensky and wife, First Lady Olena Zelenska. 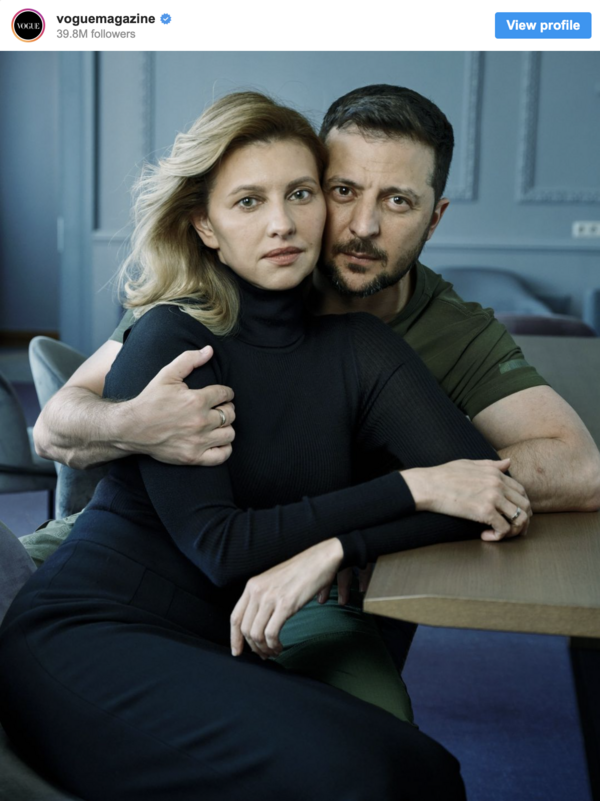 Breitbart reported that “Zelensky and Zelenska were photographed by famed American photographer Annie Leibovitz for the Vogue digital cover which has been promoted across the fashion magazine’s social media platforms…While Zelensky and Zelenska pose for Vogue, American taxpayers have footed the bill for tens of billions of dollars in foreign aid to Ukraine even as inflation and skyrocketing gas prices cripple working and middle class American families and the United States heads toward a recession.”

During one part of the shoot, Zelensky balked at American concerns about the war and financial toll it has taken on the United States, saying, “inflation is nothing, COVID is nothing.”

Zelensky is doing what he can for his country, but inflation and COVID are not “nothing” to the millions of Americans who have lost their livelihoods and even their lives over the past two years.

Americans do not have an obligation to help Ukraine—they should have the choice to do so.

But globalist politicians took that choice out of their hands.

Zelensky added, “I will be very honest and maybe not very diplomatic: Gas is nothing…just try to imagine what I’m talking about happening to your home, to your country…Would you still be thinking about gas prices or electricity prices?”

With all the cavorting around the streets of Kiev he’s doing with international fashion magazine photographers, not to mention visiting foreign politicians and Hollywood stars, you have to ask how bad things really are in his house.

Zelensky should direct his phony outrage at the foreign policy establishment that has made a mess of Eastern Europe (and obviously the Middle East) through war-mongering policies that do not serve the interests of the American people.

But there are NGOs and defense firms that are doing quite well with the tens of billions in aid money that was just sent to Ukraine.

Instead of relief, Americans get a photo shoot.

Those photos should be the end of US taxpayers sending any money to billionaire Ukrainian politicians and arms dealers.

Black Lives Matters rioting, looking, raping and killing people was justified according to the Left – you see,…

There is no Governor Joe Biden hates more than Ron DeSantis. He is standing up for the state…

Cultish leftists loathe anyone who makes them look bad or stands in the way of Democrat Party power.…

Joe Biden and the Democrats are hellbent on imposing medical tyranny. Public health officials have their marching orders…

Tucker Carlson is taking on the Biden regime’s insanity. Democrats are desperate to shut him down. And this…

The Biden administration and Democrats increasingly rely on Big Tech to step in and do their dirty work.…

Casualties are mounting in the international crisis sparked by the conflict in Ukraine. The war is causing unforeseen…

YouTube just kneecapped one company for a disturbing reason