Big Tech is obliging the censorship goals of the establishment.

They don’t want counter-narrative voices to be heard.

But YouTube’s co-founder just ripped them for an idiotic move and you won’t believe the number one video he used to do it.

YouTube recently made the announcement that they would be phasing out visible “dislikes” on a video.

And the co-founder of the company called out the stupidity of such a move using the first video ever posted to YouTube 16-years ago.

The co-founder of YouTube has labelled the company’s decision to remove the ‘dislike’ button as a “Stupid move.” Jawed Karim, who sold his stake in YouTube for $65 million in 2006, was the first person to ever upload a video to YouTube and he used that video to comment on the scrapping of the ‘thumb down’ button.

In the description section of the video, which shows the engineer visiting San Diego zoo 16 years ago, Karim edited in the comment “When every YouTuber agrees that removing dislikes is a stupid idea, it probably is. Try again, YouTube.” 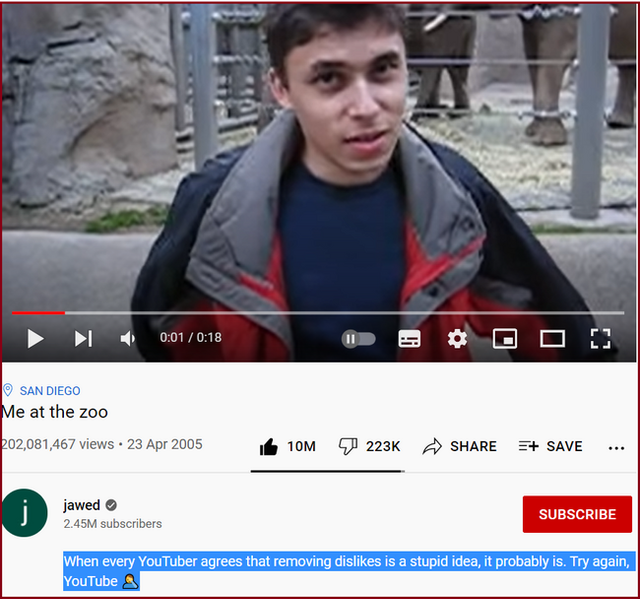 Many believe that the move was made to protect Joe Biden, Democrats and the media establishment.

The phenomenon is so common, it shows that legacy media networks either have inflated subscriber numbers, or terrible engagement.

Either way, they do not seem to have their pulse on the nation.

Joe Biden White House videos get badly downvoted with regularity, which undercuts the premise that he was the most popular president ever.

Gee, I wonder why they're about to hide dislikes.

It's a total mystery. pic.twitter.com/tCEwDDVdBY

The excuse mustered by YouTube is that hiding the dislike count will protect creators from “harassment,” which is the establishment’s cover for everything.

There’s always some nefarious threat lurking which requires censorship or regulation or high taxes or whatever the Left wants.

That excuse doesn’t even make sense because creators can still see the dislike numbers in their metrics.

They don’t care about creators getting harassed. They just don’t want the wider public to see just how unpopular and tone-deaf the establishment voices are.

Privacy and free speech are under serious assault. The establishment is cracking down on dissent in a creepy…

Big Tech has become just another arm of the left-wing machine. Their censorship is laughably one-sided. And Trump…

Big Tech is completely out of control. Not even established news outlets are above being silenced. Now a…

A bombing rocked this retired Green Beret’s life. Now, he’s running for Congress and speaking out on the…

Twitter’s woke new CEO is doubling down on censoring the truth. Anyone standing up to the leftist narrative…

Big tech is operating as an arm of the state. Twitter in particular has been instrumental in enforcing…

Ron DeSantis has driven the Left crazy by not backing down. He’s on the offensive turning Florida into…