Amazon is delivering coal to these conservative companies and nonprofits

Amazon is one of the largest companies in the entire world.

In fact, a majority of Americans shop at the Amazon marketplace.

But this Christmas, Amazon is delivering coal to these conservative and Christian companies and non-profit organizations.

The power of Amazon

65% of Americans say they use the marketplace at least monthly.

With so many customers visiting its virtual store, Amazon tried to, “give back,” through its Amazon Smile program.

Amazon Smile sends a small percentage of a customer’s purchase price to a charity of their choice.

This holiday season, even users not using Amazon Smile, are prompted to pick a charity for a give back after purchasing the perfect Christmas gift for a loved one.

But Amazon – founded by leftist Washington Post owner Jeff Bezos – is showing a partisan bias by leaving out companies and charities with conservative or Christian missions.

Unfortunately, you won’t find the Alliance Defending Freedom as one of the charities of choice on Amazon.

You will find the Southern Poverty Law Center – a radical Left organization that labels any conservative group, “racist” – and then works to get those groups blacklisted. 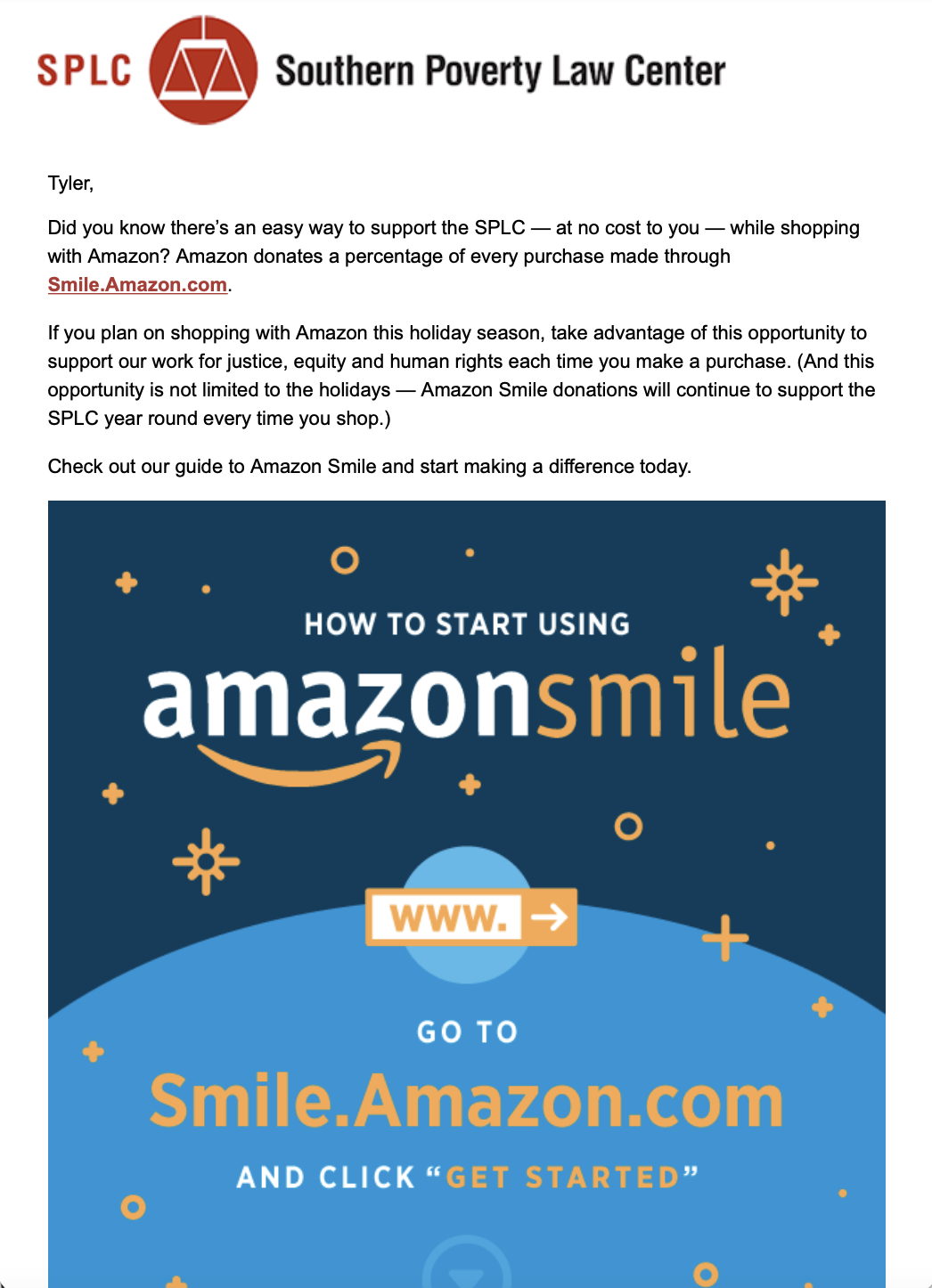 “Did you know there’s an easy way to support the SPLC—at no cost to you—while shopping with Amazon?” a SPLC email blast reads. “Amazon donates a percentage of every purchase made through Smile.Amazon.com. If you plan on shopping with Amazon this holiday season, take advantage of this opportunity to support our work for justice, equity, and human rights every time you make a purchase.”

“Amazon systematically excludes many conservative Christians from the kind of Christmas cheer that comes with knowing that every purchase helps a good cause of their choice. Thanks to Amazon’s decision to exclude organizations that the SPLC brands ‘hate groups.’”

The Ruth Institute is another victim of the Amazon/SPLC partnership.

The Ruth Institute is an interfaith coalition aimed at helping “survivors of the sexual revolution.”

However, when they applied for Amazon Smile participation in 2016, they were rejected due to the SPLC.

In a congressional hearing, Jeff Bezos admitted to relying on SPLC to qualify eligible charities – he called it an “imperfect system.”

However, years later, there has been no change.

“Amazon Smile systematically prevents conservatives and Christians from the same Christmas cheer that the SPLC offers its supporters,” O’Neil wrote.

Twitter radicals did something infuriating after banning Donald Trump

Joe Biden was carried over the finish line by Big Tech in 2020. As president, this cozy relationship…

Big Tech is getting a second look from people who blindly trusted them. Facebook and Twitter have been…

Big tech is cracking down on conservatives. It’s only accelerated ever since Donald Trump got booted off every…

The Deep State is flexing its power under the Biden regime. They’ve got conservatives in their crosshairs. And…

Silicon Valley has made it clear they want Conservative outlets silenced. Now the patriarch of Fox News is…

The establishment does not tolerate dissent. People got a crash course in that lesson during the height of…

“Freedom of Speech” tour rocker Neil Young will go on all of Dr. Fauci’s mixtapes after this one unhinged demand

Leftists are desperate to convince the world that conservative Republicans are a fringe minority.  And when it comes…