Social media and Big Tech companies have cracked down on users for ideological reasons.

The starkest example was President Donald Trump getting booted from every major platform.

Now a whistleblower just revealed how an online payment platform looked the other way for a crime that will make you furious.

And just like all the other Big Tech platforms, Patreon was ideologically captured after Donald Trump’s election in 2016.

Suddenly, popular content creators on the Right were banned from receiving contributions from their own subscribers.

Patreon  allegedly looked the other way when the sexualization of children was occurring on the platform.

Reduxx reported that “Emily Metcalfe, a now-former security and privacy engineer at Patreon, posted to LinkedIn that the entire Patreon security team had been abruptly let go…[F]ollowing the abrupt decision, an ex-employee statement from August began to circulate and raise alarm bells amongst social media users…[A] former trust and safety specialist at Patreon took to job review platform GlassDoor to allege that Patreon had demonstrated negligence with regards to child safeguarding in a review simply titled ‘Illegal.’ The former employee, who worked at Patreon for over one year, claimed platform management had been actively encouraging safety staff to overlook pedophilic content unless ordered to do otherwise by law enforcement.”

The same platform that banned content creators for raising questions about the vaccine or the 2020 election was allegedly directing employees to overlook the abuse of children.

The ex-employee wrote on GlassDoor, “We are being told specifically by management and executives NOT to take down content that is illegal or was reported as sexual in nature involving minors unless the police make contact with legal or we have an order by a court…When others try to inform management that there’s an amalgamation of accounts that are selling lewd photographs of what appear to be children, all concerns are dismissed…[Patreon leadership is] advocating for customers who are minor-attracted persons (or MAPs)…This is no way to run a company, this is no way to allow children to be exploited on our platform like this.”

The term MAP is the latest Orwellian phrase created by the Left to soft-sell pedophilia.

Reduxx added that “the term ‘minor-attracted person’ was first coined by pro-pedophilia lobbying group B4U-ACT, which was founded in 2003 by convicted child rapist Michael Melsheimer. Melsheimer explicitly stated that the purpose of the organization was to normalize pedophilia where the National Association of Man-Boy Love (NAMBLA) had failed to do so. Around the time of the organization’s creation, Melsheimer advised his fellow pedophiles on pederast forum BoyChat that his new approach for normalizing pedophilia would be focused around garnering public sympathy by deceptively claiming that the humanization of pedophiles would lead to a reduction in child sexual abuse.”

Pedophiles have been attempting to graft themselves onto the gay rights movement for decades.

NAMBLA attended the first Pride Parade, but they were quickly run out of the movement.

Now they’re back with a vengeance in the form of MAPs. 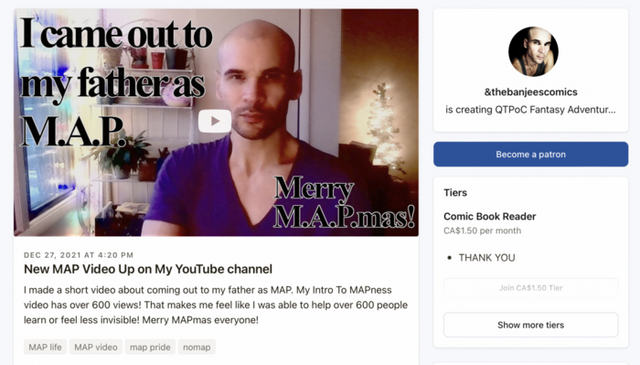 However, conservative commentators like Lauren Southern and Sydney Watson were banned from the platform for wrongthink.

The Left currently has a stranglehold on Big Tech platforms, and truly disgusting ideas are being protected.

This Ivy League school is creating a protected class of students

Regime media competitor had the perfect response to left-wing propagandists

The Left no longer pretend to be in favor of free speech. Power is the only principle they…

The Democrat Media Complex has been on a seek-and-destroy mission targeted at J.D. Vance. The Left along with…

Twitter is censoring something about COVID that will terrify you

Big Tech censorship has become dystopian. The truth is not an affirmative defense against social media crackdowns. Now…

Donald Trump has conquered business, TV and politics. He’s got his sights set on Big Tech next. And…

Jim Jordan is getting fed up with Big Tech’s censorship. He’s leading the fight against the Big Tech…

Twitter’s CEO sent one message that left everyone stunned

Twitter has become the symbol of Big Tech censorship. CEO Jack Dorsey has done nothing to address the…