Never before has a former President’s home been raided by the administration in power.

The Democrats and their media allies have been working overtime to justify Merrick Garland’s raid of Donald Trump’s home at Mar-a-Lago.

The press tried to convince people that Trump had nuclear secrets stashed away in his home.

Since that initial claim, the narrative has shifted multiple times, and the best Democrats can muster is that maybe Trump had documents that may or may not have been declassified, even though the president has the power to declassify whatever he wants.

Now it turns out Barack Obama held classified documents in an abandoned warehouse.

That flies in the face of the narrative presented by the Democrats and the corporate-controlled press; they tried to paint the picture that Trump did something highly unusual in keeping documents.

The letter read, “The Obama Foundation agreés to transfer up to three million three hundred thousand dollars ($3,300,000) to the National Archives Trust Fund (NATF) to support the move of classified and unclassified Obama Presidential records and artifacts from Hoffman Estates to NARA-controlled facilities that conform to the agency’s archival storage standards for such records and artifacts, and for the modification of such spaces. The first transfer of $300,000 was already made on August 9, 2018. An additional interim transfer will be made within 180 days of that date. Subsequent payments are subject to the negotiation of terms of the digitization process and museum operations.” 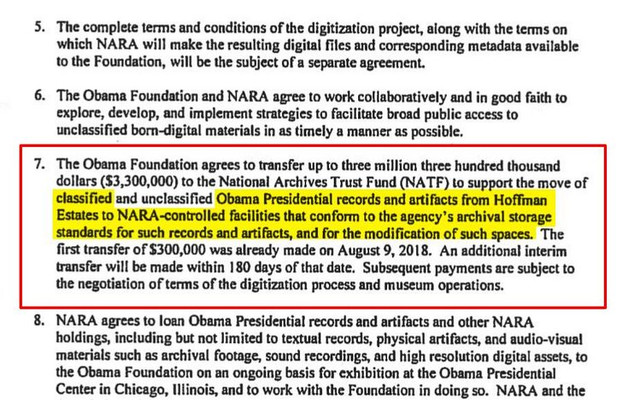 This revelation comes after the Associated Press “fact-checked” and, erroneously deemed false, claims that “Former President Barack Obama took 30 million documents, many of them classified, to Chicago upon leaving the White House.”

The AP “fact-check” in early August of this year stated such claims were false.

Anti-Trump “journalists” have some explaining to do

“But these records were given to NARA in 2017, upon the end of Obama’s term, and they remain in NARA’s sole custody, in accordance with federal law. Some 30 million documents were moved to a NARA-operated facility in the Chicago area, as the agency explained in a statement Friday, but none were classified. The administration’s classified documents are stored in a separate NARA facility in the Washington, D.C., area,” The AP “fact check”  read.

The AP stated that Obama administration records were “exclusively held and maintained” by the National Archives and Records Administration (NARA).

That’s particularly embarrassing for The AP, considering as PJ Media reported, the letter, openly available for any reporter to see on the Obama Foundation website, was dated Sept. 11, 2018.

But the Democrats and their corporate-controlled press pals it seems attempted to alter the facts in real time to fit their anti-Trump agenda.

Joe Biden and the Democrats cannot win on their record. So they try to shut people up instead.…

Barack Obama was blindsided by this blue state’s totalitarian move

Democrats don’t hesitate to weaponize the government for their political advantage. They’ll do anything to get a leg…

This James Clyburn Lt. says Big Tech players are getting exactly what they deserve – but it’s not what you think

Big Tech censors have brought plenty of trouble on themselves.  Now it looks like they’re getting exactly what…

Elon Musk is in the crosshairs of the radical Left for his massive success. He’s not afraid to…

Elites have a few classic go-to recipes to expand power in their authoritarian cookbook. One of them is…

Big Tech is finally being questioned about its control on society. Unelected tech bros in Silicon Valley are…

Former President Donald Trump remains quiet on his future political plans. However, he is not remaining quiet on…