New accusations have them in a tailspin.

And these jaw-dropping Biden revelations have Silicon Valley titans scrambling.

The work of investigative journalist Peter Schweizer is being censored because he poked Biden and the Big Tech bear.

In Schweizer’s new book “Red-Handed,” he exposed the connections between not just the Biden family and the Chinese Communist Party, but also those between Big Tech and the CCP.

Clearly Bill Gates and his fellow tech titans are furious about it.

And they’re desperate to snuff out any mention of it on their platforms.

In the latest example, a LinkedIn user tried to share information about “Red-Handed,” but his message was censored.

Microsoft owns LinkedIn and Bill Gates was one of the main targets of the book, so it is clear that mentions of “Red-Handed” are being down-boosted on the platform.

“Even if you think nothing could surprise you anymore, this is shocking. The way these immoral and corrupt big-tech sycophants are kissing the ass of the CCP (who by the way are committing a genocide and have slaves in concentration camps as I write this) is not only pathetic, but downright shocking.”

Strong opinions are not grounds for censorship, yet LinkedIn slapped the following label on the post:

“Only you can see this post. It’s been removed because it goes against our Professional Community Policies.” 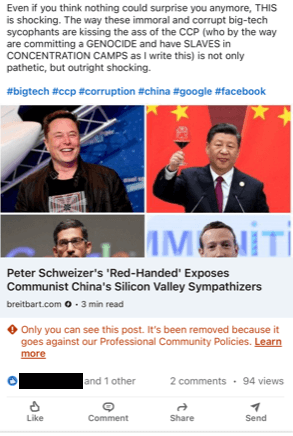 That is truly absurd considering the only subjects mentioned are “corrupt big-tech sycophants” and the Chinese Communist Party, an authoritarian regime that has committed many human rights atrocities.

Shielding billionaires and communist authoritarians does not seem to be keeping in the spirit of anti-bullying.

During an interview for his book, Schweizer hammered Gates and said:

“[T]his is really the beginning of a courtship between Xi—the communist regime in China—and the biggest names in tech: Bill Gates, you look at Mark Zuckerberg. These are all individuals that have deep ties with communist China, and they’re supportive of their policies and these ties actually advance the military and intelligence capabilities of China, which is now positioning itself to surpass the United States. That’s their goal.”

Gates is one of the richest and most powerful men in the world.

He does not need to be protected from a single LinkedIn post.

When Donald Trump was simultaneously removed from every single social media platform, it signaled the dangerous power of Big Tech.

If a sitting President of the United States can be silenced, it means anyone can.

Now the Big Tech establishment is lashing out at anyone who questions it and the American people are getting a clear picture of how the establishment maintains power.

Joe Biden has been a bigger disaster than anyone could have predicted. He’s desperate to drop the hammer…

Democrats have shown that they will do anything to get their way. Power is the only principle far-Left…

One glitch just showed the dangers of Big Tech monopolies

Silicon Valley oligarchs hold immense power. That was made abundantly clear during the 2020 election. And one glitch…

Democrats are hell-bent on pushing woke indoctrination on kids. They’re hoping no one notices.  Now this Jill Biden…

No one on the political Right is surprised anymore when the Left “cancels” them for making innocuous, common-sense…

The elites want all Americans under their thumb. Both public and private figures are being brought to heel.…

Big Government is dangerously expanding its reach. The International Left are quickly moving toward authoritarianism. But one company…

Governments across the world are tightening the screws to their citizens. COVID restrictions were only the beginning. And…