The Democrat Party’s scuzzy corruption scandals and failed rule have voters set to toss Speaker Nancy Pelsoi (D-CA) and her party from the House majority in the Midterm elections.

And her problems just got worse.

The establishment got a free ride until Donald Trump came along.

He shined a light on the shady dealings of the Washington, D.C. Swamp and how scuzzy politicians like Speaker Nancy Pelosi (D-CA) are getting away with insane levels of swampy corruption.

Members of Congress get a pretty good deal.

They make six-figure salaries, get top healthcare, and really don’t even have to work year-around.

Plus, if they’re like Nancy Pelosi, they can make major moves in the stock market based on legislation they can control.

Pelosi is notorious for magically predicting stock winners. That’s why she is the richest member of Congress.

And she’s up to her old tricks again.

Breitbart reported that “Paul Pelosi, husband of House Speaker Nancy Pelosi (D-CA), recently bought up to $5 million in stocks in a semiconductor company. This comes right before the Senate is set to vote on a competition bill next week that would give a $52 billion subsidy to the semiconductor industry, Reuters reported. Paul Pelosi exercised 20,000 shares worth between $1 million to $5 million in Nvidia, a semiconductor company based in Santa Clara, California, which was revealed in a disclosure that Nancy Pelosi filed to the House of Representatives on Thursday.” 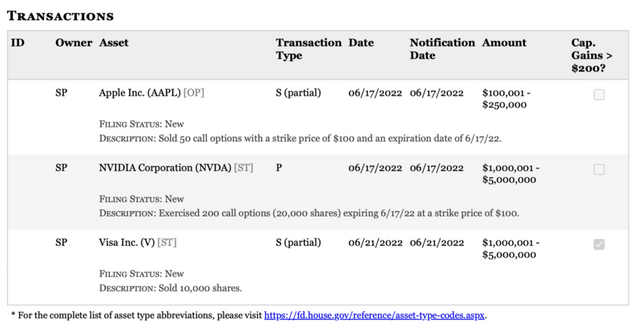 A Twitter account that simply tracks Pelosi’s trades was temporarily shut down, but it was resurrected after public backlash.

Nvidia $nvda is up 10% since Nancy Pelosi filed.

Another win for Pelosi Capital.

People have gone to jail for less financial malfeasance, but Pelosi and her corrupt ilk get away with it.

When Pelosi was called out on the scam of family members of congressmen trading, she laughably replied, “ No…We’re a free-market economy. They should be able to participate in that.”

This is the opposite of a free market.

This is people in government putting their thumb on the scale.

Fox host Steve Hilton has kept a close eye on Washington, D.C. Swamp corruption, and he has busted Pelosi more than once.

Hilton once reported, “On March 18th, 2008, while she was Speaker, Nancy Pelosi bought $220,000 of Visa IPO or initial public offering stock. She got it a day before it was publicly traded—a privilege reserved for a select group of hand-picked investors. Here’s where it gets really swampy. Two weeks before she was given special access to the IPO stock, a piece of legislation called the Credit Card Fair Fee Act of 2008 was introduced in the House. It would have cut Visa’s revenue and hurt Visa’s stock price. Something that then-Speaker Pelosi now had a direct interest in. By a remarkable coincidence, this piece of antitrust legislation, normally such a priority for Democrats, never made it to a vote on the House floor.”

Establishment elites get to play by a different set of rules.

The corruption is out in the open, but nothing can be done because people keep voting in the same corrupt politicians.

If 2020 taught Americans anything, it’s that Big Tech is 100% in the Democrat Party’s corner. Social media…

There’s a reason the Left wants to destroy Tucker Carlson so badly. He tells the truths they don’t…

Joe Biden and his Attorney General aren’t playing games. First it was parents.  Now this one raid signaled…

People will read about the 2020 presidential election for decades to come. The calls for recounts, voter irregularities…

Schools across the country have started welcoming students back to class. As the new school year begins, it…

The Democrats made a huge mistake. They believed that defeating Donald Trump in 2020 gave them a pass…

Megyn Kelly ransacked Anthony Fauci after his most infuriating comments yet

Anthony Fauci announced he’s leaving his position in December. After the announcement, he’s proved even more smug on…