The Left is getting cozier with Big Tech censorship.

Counter-narrative voices are slowly being phased out of the digital town square.

And leftists are furious that Conservatives are making one move to fight Big Tech.

Leftists control the so-called mainstream media, and they know it.

That’s why they’re fighting so hard for total control of Big Tech because they need to be the drivers of the public conversation.

But conservatives are fighting back by creating popular platforms to counter the censorious and biased nature of left-wing outlets.

And leftists are exasperated by it.

Conservatives are aggressively building their own apps, phones, cryptocurrencies and publishing houses in an attempt to circumvent what they see as an increasingly liberal internet and media ecosystem.

Why it matters: Many of these efforts couldn’t exist without the backing of major corporate figures and billionaires who are eager to push back against things like “censorship” and “cancel culture.” 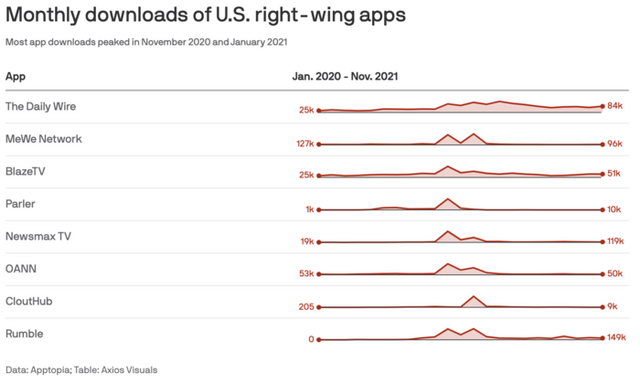 So the problem is billionaires are backing ventures that usurp the media monopoly of the Left.

The article goes on to list companies and individuals investing in some of the conservative ventures.

Crypto: A new cryptocurrency called “Magacoin” has already caught the attention of high-profile conservatives, per The Guardian.

Axios is particularly focused on the ventures supported by Donald Trump.

Since he is the Left’s boogeyman, simply mentioning his name is supposed to connote that something nefarious is afoot.

Banks and payment processors have already begun banning right-wingers for political reasons, so it’s only natural that entrepreneurs would mind a way to get around the left-wing gatekeepers who have become more authoritarian.

Big Tech is encouraging employees to do one nightmarish thing

Big Tech firms are rapidly encroaching on freedoms. People are slowly understanding the consequences of the digital age.…

Ron DeSantis has driven the Left crazy by not backing down. He’s on the offensive turning Florida into…

Everything is going wrong for Joe Biden these days. He’s desperate to deflect criticism of his failing regime.…

Big Tech is hellbent on aiding and abetting a radical leftist mob. Actual journalists trying to cover the…

Schools across the country have started welcoming students back to class. As the new school year begins, it…

The radical Left is trying to dominate every aspect of life. They try to crush anyone who stands…