The Biden crime family is finally under the microscope.

The corruption that was hiding in plain sight is suddenly being noticed.

But Joe Biden’s allies are flexing their muscles in a terrifying way to protect Hunter Biden.

Hunter Biden’s numerous scandals have become fair game now that his father Joe has outlived his usefulness for the Democrats.

The Party needed someone who could pretend to be a moderate in order to defeat Donald Trump in the midterms.

Now that Biden’s approval ratings have cratered and the country is in turmoil, Hunter Biden’s laptop and affiliated scandals are getting a look.

But establishment leftists at Wikipedia censored an entry for Rosemont Seneca Partners, the investment firm co-founded by Hunter Biden.

The page was briefly on the site. 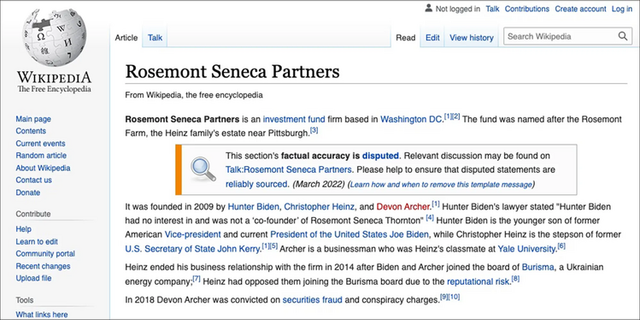 However, one of the many leftist editors who oversee Wikipedia nixed the page because they said it was “not notable.”

An editor named AlexEng wrote, “Keeping it around additionally risks WP:BLPVIO, as this is a magnet for conspiracy theories about Hunter Biden…[Rosemont Seneca] is only mentioned in connection with its famous founders, Hunter Biden and Christopher Heinz.”

That same editor admitted on his own page that he is biased.

AlexEng wrote, “I always edit with the best intentions, but I sometimes make good faith mistakes…Occasionally, I may let bias seep into my work…Of course, everybody has implicit bias, and this list should not be considered exhaustive…This list should also not be used as ammunition in a content dispute, though I am quite sure somebody reading this will consider that option.”

In addition to Hunter, Rosemont Seneca bigwig Eric Schwerin made many visits (19 total) to the White House when Joe Biden was Vice President.

That pokes a hole in the narrative that Hunter’s business dealings were entirely separate from his father’s capacity as Vice President.

Nobody believes that narrative anyway. Democrats simply don’t care and it remains to be seen how such corruption plays out in the US legal system and whether Americans can trust it.

Of course, the same people that want to silence conservatives are benefiting themselves and Big Tech is running cover for all of it.

The edit of the Rosemont Seneca page is further proof of Wikipedia’s liberal bias.

Wikipedia co-founder Larry Sanger, who left the organization years ago, has complained on many occasions about the leftward tilt of the site.

Sanger once explained, “Wikipedia can be counted on to cover not just political figures, but political issues as well from a liberal-left point of view. No conservative would write, in an abortion article, ‘When properly done, abortion is one of the safest procedures in medicine,’ a claim that is questionable on its face, considering what an invasive, psychologically distressing, and sometimes lengthy procedure it can be even when done according to modern medical practices.”

The Democrats and their Big Tech allies are desperate to hold the line on the Biden crime family corruption for as long as possible.

No one can tell if it’s Biden’s mental decline or the looming 2022 midterm elections, but he has…

Hillary Clinton does not respond well to answers she doesn’t like. And her latest move to signal she’s…

Biden administration goons are suddenly in a frenzy over tech monopolies

Democrats usually have no qualms shoving whatever they think down the public’s throat. That’s especially true on Social…

Joe Biden is running a disastrous administration. Everything he touches turns to mush. Now, a DoD veteran just…