The Democrat establishment is losing and they know it.

That’s why Democrats have roped in multinational corporations to do their bidding.

And Joe Biden is furious that Jeff Bezos hasn’t taken out one growing problem.

Big Tech has become an enforcement arm of the Democrat Party.

Democrats flex their muscle and threaten regulation, and companies suddenly jump to appease them.

The starkest example came when Google, Apple, and Amazon conspired to take out Twitter competitor Parler when it was trending as the most popular app in the world.

Now, Amazon has to contend with Alex Jones rocketing up the presales charts.

Jones’s upcoming book titled The Great Reset: And the War for the World hit number one on Amazon a month out from release. 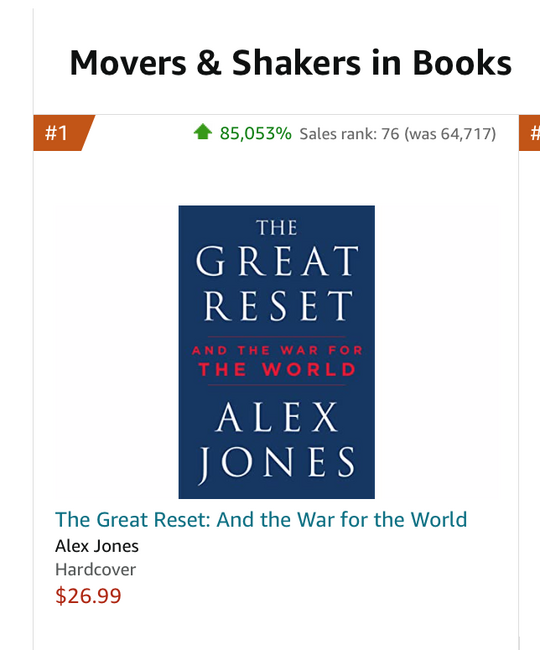 Jones has served as the canary in the coal mine with regard to censorship.

The Left’s censorship regime didn’t really ramp up until 2018 when Jones was booted off every single social media platform because of statements he made years prior about the horrific Sandy Hook shooting.

It was a shocking form of censorship, but few spoke up about it because of the Left’s hate for him and the establishment Right’s wishes he would go away.

But freedom-lovers should have taken the persecution of Jones far more seriously.

Suddenly “hate speech,” “medical misinformation,” and “election disinformation” were used as pretexts not only to boot people off social media platforms, but deny them access to banking and even ridesharing apps and other services.

Participants in the Canadian Freedom Trucker Convoys were barred from receiving money from crowdfunding sites, and they even had bank funds temporarily frozen.

The then sitting President of the United States was kicked off of all social media sites, and he remains banished to this day.

None of those shocking maneuvers would have been possible if people had stood up for Alex Jones before the censorship expanded out of control.

But the questions on Democrats’ minds must be why Amazon hasn’t nixed Jones’ book.

Of course, Joe Biden has drawn the ire of Amazon founder Jeff Bezos of late over the administration’s insane inflation claims.

Ouch. Inflation is far too important a problem for the White House to keep making statements like this. It’s either straight ahead misdirection or a deep misunderstanding of basic market dynamics. https://t.co/XgKfEICZpk

Still, Bezos is a stone-cold leftist with a globalist bent by all accounts.

And Amazon hasn’t been shy about digitally burning books.

The e-tailer refused to sell the book “When Harry Became Sally,” which was a scholarly look at the transgender push that has accelerated over the past few years.

Other books on the topic have been denied access to advertising.

And employees within Amazon were caught on camera conspiring on ways to have other “problematic” books removed.

Tucker Carlson wrote one of the blurbs for Jones’s book that read, “If Alex Jones is just a crackpot, why are the most powerful people in the country trying to silence him? No one bothers to censor the flat-earthers. Maybe Alex Jones is onto something. Read this book and decide for yourself who’s crazy.”

Jones has been going after the globalists for decades, and they have gone to great lengths to silence him.

One economist told the truth about Biden’s economy, then something terrifying happened

The establishment and their allies in corporate-controlled media worked feverishly to overturn the results of the 2016 election.…

Donald Trump has conquered business, TV and politics. He’s got his sights set on Big Tech next. And…

YouTube tried to take on Ron Paul. But they severely underestimated the former Congressman’s base

This James Clyburn Lt. says Big Tech players are getting exactly what they deserve – but it’s not what you think

Big Tech censors have brought plenty of trouble on themselves.  Now it looks like they’re getting exactly what…

Joe Biden and his Attorney General crossed a dangerous line by weaponizing the FBI against his enemies. You’d…

Big Tech has the back of Joe Biden and Democrats. One Republican wants to upend this cozy relationship.…

Browser giant responded to SCOTUS ruling with one bone-chilling announcement

The Democrats are losing and they know it. That’s why they’re marshaling their resources and calling in the…

One poll proves Republicans are fed up with Big Tech

Republicans have long railed against media bias. Now the Right is seeing that same bias among the Silicon…