Civil liberties are being violated in a nightmarish way.

And Joe Biden and his gatekeepers are sweating bullets over one looming lawsuit.

The last two years have proven that the COVID regime will go to extreme lengths to silence anyone who questions the establishment narrative about the virus or the vaccine.

For a year, it was verboten to suggest that the virus could have come out of the level-four biohazard lab in Wuhan instead of the wet market across the street that did not even serve bats.

Now it’s generally accepted that the virus likely came from a lab.

One of the strongest voices fighting against the lies of the COVID regime was novelist and former New York Times reporter Alex Berenson.

In a sea of lies and propaganda, Berenson reported the hard data that conflicted with the regime’s narrative, and that’s why they wanted him silenced.

And it turns out the Biden White House specifically urged Twitter to boot him from the platform.

Berenson wrote on his Substack page, “Biden Administration officials asked Twitter to ban me because of my tweets questioning the Covid vaccines, even as company employees believed I had followed Twitter’s rules, internal Twitter communications reveal. In a White House meeting in April 2021, four months before Twitter suspended my account, the company faced ‘one really tough question about why Alex Berenson hasn’t been kicked off from the platform,’ a Twitter employee wrote.” 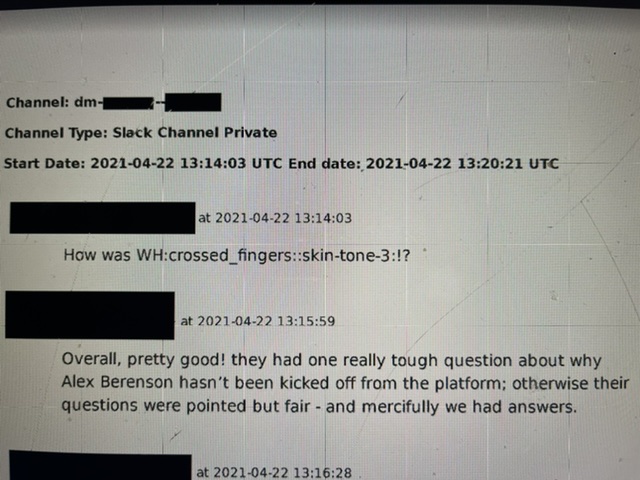 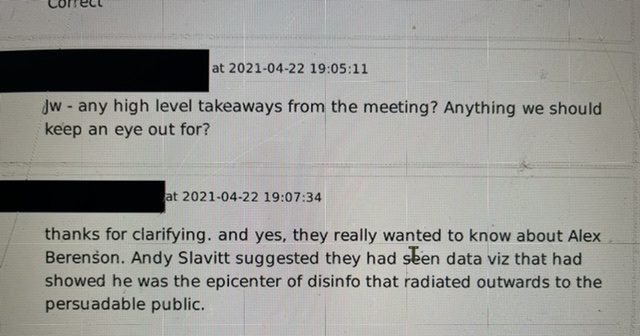 However, that does not apply when companies are acting at the behest of the state.

Berenson added, “The employee recounted the meeting discussion afterwards on Twitter’s internal Slack messaging system. The message, and others, make clear that top federal officials targeted me specifically, potentially violating my basic First Amendment right to free speech. The First Amendment does not apply to private companies like Twitter. But if the companies are acting on behalf of the federal government they can become “state actors” that must allow free speech and debate, just as the government does.”

This is incontrovertible proof that Big Tech has become an enforcement wing of the establishment.

Democrats crow about Republicans being fascists, but the move against Berenson is precisely what fascism looks like.

Berenson was eventually banned from Twitter, but he sued the company, and was allowed back on the platform.

The Biden administration could be the next target for a lawsuit.

Just say the name Hunter Biden, and it conjures up thoughts of a man with countless skeletons in…

Vladimir Putin’s war of aggression against Ukraine has caused a ripple effect throughout the globe. Joe Biden is…

There is no Governor Joe Biden hates more than Ron DeSantis. He is standing up for the state…

Joe Biden is a vain, thin-skinned politician. He couldn’t believe his eyes at this Big Tech betrayal.  And…

Joe Biden has overseen one policy nightmare after another. His biggest disasters have made Americans less safe here…

Joe Biden was handed the White House with the help of Big Tech. Now that he’s in office,…

The fusion between Big Tech and the state is happening before our very eyes. That spells bad news…

The separation between Democrats and Big Tech is paper-thin. Neither party is even trying to hide the connection…